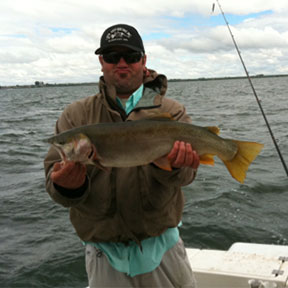 Being the son of an adamant fly fisherman, Travis began fishing as soon as he could hold a rod. He took to fly fishing quickly, as if it was second nature, and developed a true love for the sport. At the age of 16, Travis started shuttling for outfitters in the Jackson area. During this time he was able to meet some of the legends of fly fishing and absorb the knowledge they shared with the young aspiring angler. This helped him develop a vast knowledge base of the best fishing in the region. His guiding career began when he was 20 and regularly guides in Jackson Hole, Star Valley, and the Pinedale area; as well as the South Fork of the Snake River in Idaho. Travis spends his summers fishing and winters skiing with his beautiful daughter and son. In the fall and spring he can be found on the Salmon River in Idaho chasing Steelhead. He is excited and willing to share his knowledge just as others did when he was learning. He also shares the same passion as his father in regards to “finding the big fish.” Be sure to call SRA and book a trip with Travis. A guide who is passionate and also laid back on the river.