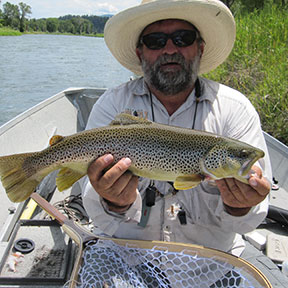 Bart, aka Bartman, is a 4th Generation Star Valley, Wyoming resident. He was born with a fly fishing rod in his hand and has embraced the art of fishing. Some of his earliest memories are of fly fishing with his father and grandfather. He has also explored many rivers and streams in eastern Idaho. Bart started guiding fishing trips in 1980 taking clients by horseback up to mountain streams and lakes in the Hoback and Pinedale area. Then in 1984 he started guiding fly fishing trips with local guides and fly shops down the beautiful rivers in Wyoming and Idaho. In 1987 he began guiding in Jackson Hole taking trips all around the region. When the world championship was held in Jackson on the Snake River in 1997, Bart was the guide for not only the first place contestant but the second and third as well! In 2001, he was the High Point Guide for the Jackson Hole One Fly Tournament, and in 2010 Bart was awarded the Carmichael-Cohen Memorial Guide Award during the Jackson Hole One Fly Tournament due to his dedication, and contribution to fly fishing. Bart is a true representation of the best qualities in guiding. Bart is married to his beautiful wife Julie and has five grown sons. They all enjoy fishing, hunting, and many other outdoor activities together. Bartman is one of our most sought after guides, and booking in advance is your best bet if you would like to reserve a day with him.